For someone claiming to be a man of the cloth, that is, a bishop, Manchester sure has some spite to spit at his arch-enemy David Farrant.

“Della Vallicrus,” after being rumbled as a total fraud, transformed into “Della Farrant” on Facebook with the same degree of paranoia as the man who shares an identical surname and number of letters in a forename which also coincidentally bears the same initial. Anyone could be forgiven for thinking that they are one and the same person, but obviously this is not the case because one of them can spell and knows some basic grammar while the other one (David Farrant) seems unable to apply even the fundamentals of the English language to anything he writes; at least, not without a host of spelling errors accompanied by nonsensical grammar without any knowledge or application of syntax. Given that Farrant either ran away or was expelled from those schools he was sent to privately by his father before entering a life of charlatanry and miscreancy while on state benefits from the age of fifteen until now, it should come as no revelation to discover these inadequacies.

I’m no professor of the english language but that passage above contains more spite, pound for pound, than anything i’ve read on the 40 year feud between David and Manchester!

So for those of you unaware of Manchester’s spiteful gusto, look carefully at the man who claims to be holy!

Posted by arminiusvambery on October 27, 2011
Posted in: Uncategorized. Leave a comment

The above image depicts one John Pope in his Neo-Nazi attire, an image that drew Manchester’s attention.

The following comments appear on one of his many blogs:

“John Russell Pope, a collaborating supporter of David Farrant since 1973, has a long history of Neo-Nazi involvement. He has forwarded articles to the National Front in relatively recent times.”

So one has to ask the question; who is this?

No one has ever officially come forward and claimed this image as their own, however, it should be noted that one Sean Manchester (or should that be Bishop?) has made several DMCA takedown notices against websites hosting or linking to this image.

Brendan Kilmartin of The Supernatural World has confirmed to me that an active link on his site was removed following a complaint from none other than Sean Manchester!! If this isn’t Sean Manchester, why would he claim it was his image?

Posted by arminiusvambery on October 27, 2011
Posted in: Uncategorized. Leave a comment

Posted by arminiusvambery on October 26, 2011
Posted in: Uncategorized. Leave a comment

Posted by arminiusvambery on October 26, 2011
Posted in: Uncategorized. 1 Comment 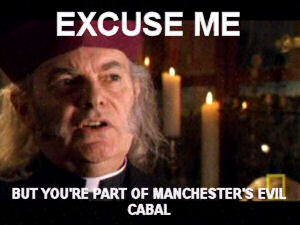 The above infringed picture (copyright of National Geographic) of Bishop ﻿Seán Manchester has been spammed across Blogger and elsewhere by someone posing as the sock puppet “Arminius Vámbéry” with the words in white capitals added by the same person who tagged several of Sean Manchester’s friends on Facebook with this bullying harassment of David Farrant. 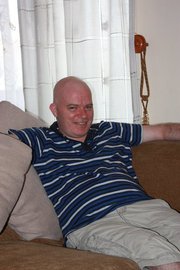 Redmond McWilliams (above), commented beneath the image: “Aint I pretty.“ 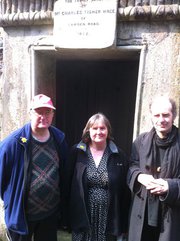 Engaged couple Ricky Sorenti and Patsy Langley (on the left) with David Farrant’s friend Gareth Medway (right) who does not have internet access, posing outside a tomb at Highgate Cemetery where David Farrant performed the only genuine exorcism forty years earlier that was broadcast on BBC television. Like Manchester, I’m totally obsessed with them and frequently misrepresent and defame them.

Don Ecker, top writer and radio broadcaster, has been one of Manchester’s victims!

Canadian Alex Rondini is another in the Manchester headlights! Apparantly Manchester thinks he’s a real demon! What a brain-washed fool I am!

Brendan Kilmartin allows anyone to post on the Highgate section of his Supernatural World forum where it is open season for libellous abuse against David Farrant made by Manchester and his many aliases! Kilmartin carefully vets each individual before accepting them as forum members on the threads where Sean Manchester’s pernicious anti-David Farrant propaganda prevails. 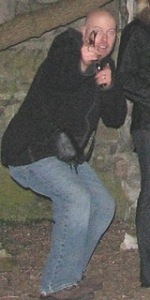 Steve Genier is another Canadian who likes David Farrant. He promotes the only genuine vampire hunter (David Farrant) on the internet and, like most others, would love to meet the man he relies on for information about REAL vampirism. A very intelligent individual.

“I so wish I was like David” – sean manchester 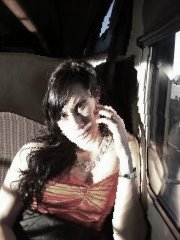 Crystal Becker is a friend of Marcos Drake. Her Facebook account is private and cannot be viewed by the nosey Manchester. David has been accepted.

David Farrant with great friend Marcos Drake. Both are close frieds of the French Satanist Jean-Paul Bourre who began collaborating in manufactured publicity stunts with Farrant in 1980. I only wish he were my friend, my publicity stunts made me a laughing stock! 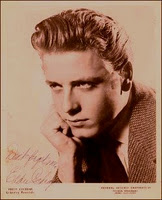 This is the image Tony Sheridan likes to offer on Facebook and elsewhere on the internet. It is, of course, a picture of 1950s rock singer Eddie Cochran. Like most of the cowardly cabal who suck up to Manchester, he remains anonymous – for obvious reasons! He is. however, not a coward, unlike Manchester and his many aliases!